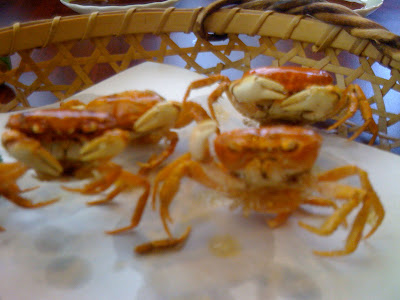 Freshly killed straight from their aquarium, which i forgot to take a picture of. it's like death row lottery, since they don't know who gets to be fried first. poor crabs - but they're really good.

ON THE OTHER HAND

DFA!! I HATE YOU! Yes you heard me right, Department of Foreign Affairs!

What is wrong with you, you know the reason why a lot of filipinos don't have passports, SSS, NBI clearance or even TIN IDs?

Because these government arms make it sooo freaking hard to get one!

gone are the days when you just have to go line up for a passport renewal, i might add, follow a simple 10 step program written in manila paper then boom - after 10days your passport is in your mailbox.

What is wrong with that system that you have to change it? now everyone is complaining and people are crying. And more than half the Philippine population doesn't have internet access and you tell them they can't get into DFA because they need to set an appointment ONLINE!
or call 737-1000 which is BUSY THE ENTIRE DAY FOR HOW MANY DAYS ALREADY IVE BEEN TRYING

People from other countries are amazed by how the Government here makes it really difficult for its own people.

find out why in the coming days, as i am about to embark an adventure on the renewal of my passport to make it to my August 1 flight.

Promote Your Page Too

just to let you know